A friend told me recently about having received the mantle of Elijah in a vision. Even though she received it, the mantle was not just for her. It was for the entire body of Messiah.

That struck me immediately as related to the outpouring of the Ruach that will come during the Tribulation and signaled to me that the start of the Tribulation may be close, perhaps only months away or just a few years.

I asked my friend if she had ever heard others talk about a “mantle of Elijah” dream or vision but she had not. Dreams and vision need 2 or more witnesses so I asked if I could publish her vision to see if others have had similar experience. Here are her notes from the vision. 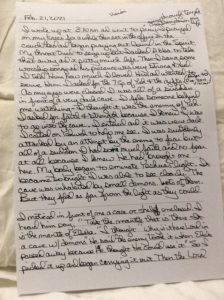 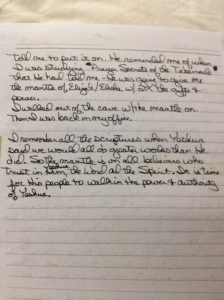 Many such prophets are prophesying about a Trump come-back or a new anointing coming to America. Folks, these ideas are not scriptural and the dreams and prophecies of those prophets are leading America in the same lies that the Jews in Jeremiah’s time were being led in. In fact, the Kings of Judah were often subject to false prophets because those prophets were saying what the Kings and the people wanted to hear. Let us not seek for what we want to hear but rather for what YHVH is saying so that we can prepare for what is coming.

America is not God’s people. The modern political State of Israel is not God’s chosen people. Biblical Israel is God’s chosen people. America, the West, and all over the world is where His people are scattered. Some even live in the modern political State of Israel. Elijah’s mantle was given to Elisha so he could call for repentance during the time of ancient Israel’s troubles. Elijah called for repentance prior to Israel’s trouble; Elisha called for repentance during the start of their trouble. Both prophets herald times of trouble and John the Baptist who operated in the spirit of Elijah suffered the fate of many end times believers who will operate in the spirit of Elijah’s mantle as worn by Elisha.

Anyone with a similar vision with the same meaning – that Elijah’s prophetic spirit is about ready to operate in the  Body of Messiah – please let me know. We need a second witness from a Torah-keeping, Yeshua believer.