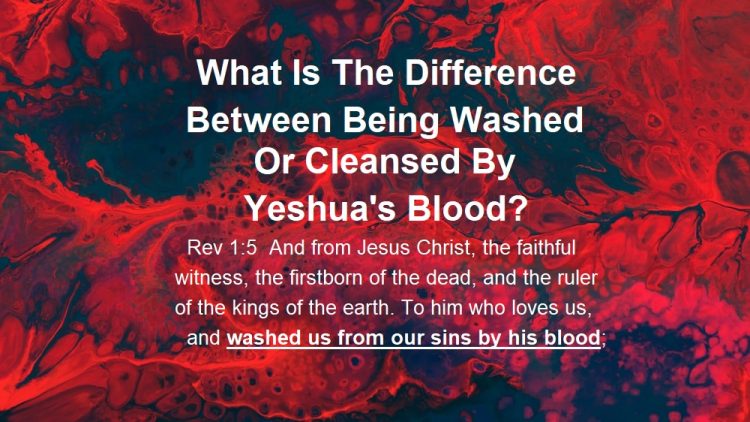 For many years, I have advocated for our mouths to stop making Egyptian and other pagan declarations regarding Yeshua and His blood sacrifice. Some have recently misunderstood what I teach on this matter, so let me set the record straight.

The phrase “covered by the blood” is nowhere found in scripture. For those who believe the scriptures are our only authority, this is crucial.

The crux of the matter is that using that terminology diminishes Yeshua’s superior and effective cleansing and washing in His blood to the mere covering of sins using bulls and goats.

Both ancient Israelites and heathens believed bulls’ blood covered their sins. In the evolution of the Egyptian bull deity, Hapi, to the Greek Apis and then to the cult of Mithras, came the idea that a slain bull covered sins and imparted the strength of the bull to the believer.

The Book of Hebrews repeatedly tells us that the blood of bulls and goats did not take away sins.

Heb 9:11  But Christ being come an high priest of good things to come, by a greater and more perfect tabernacle, not made with hands, that is to say, not of this building;
Heb 9:12  Neither by the blood of goats and calves, but by his own blood he entered in once into the holy place, having obtained eternal redemption for us.
Heb 9:13  For if the blood of bulls and of goats, and the ashes of an heifer sprinkling the unclean, sanctifieth to the purifying of the flesh:
Heb 9:14  How much more shall the blood of Christ, who through the eternal Spirit offered himself without spot to God, purge your conscience from dead works to serve the living God?

Heb 10:4  For it is not possible that the blood of bulls and of goats should take away sins.

We know it was Yeshua in the Tabernacle forgiving sins from the beginning because He told us so.

Lev 16:1  And the LORD spake unto Moses after the death of the two sons of Aaron, when they offered before the LORD, and died;
Lev 16:2  And the LORD said unto Moses, Speak unto Aaron thy brother, that he come not at all times into the holy place within the vail before the mercy seat, which is upon the ark; that he die not: for I will appear in the cloud upon the mercy seat.
Lev 16:3  Thus shall Aaron come into the holy place: with a young bullock for a sin offering, and a ram for a burnt offering.

YHVH says that He, Himself, came to the mercy seat on Yom Kippur to accept the High Priest’s offerings for atonement and to forgive, not just cover up, Israel’s sins (like the pagan bull’s blood was claimed to do). Make no mistake. Forgiveness by YHVH is different and more effective than covering up sins by a bull’s blood.

This “bull” all started in Egypt where Hapi the bull was the god of the annual flooding of the Nile river. It was no accident that this particular bull was resurrected by the Israelites at Mount Sinai in the golden calf incident. We know it was Hapi that they worshiped because the image was a calf. Hapi was also the calf of the goddess Hathor, a cow. Hapi in the form of the golden calf image was who they worshiped. The Israelites, in effect, equated YHVH with a bull and their Egyptian mindset continued!

Bull worship continues in Israel to this day. No, people are not building altars and sacrificing bulls on them. However, Christians use the language of the bull sacrifices – “covered by the blood” and “plead the blood” both of which allude to a bull covering up something. Understand: That which has been covered up can become uncovered! But Yeshua’s blood washes us and makes us clean so there is no trace, no evidence that we ever sinned!

Believers in the power of bulls’ blood had many rituals, but there was one specific ritual associated with being covered by the blood. The believer would lie in a pit with a freshly sacrificed bull’s blood pouring onto his head and face after which he could declare himself “covered by the blood”.

It is a pagan declaration to say you are “covered by the blood”. The scripture nowhere says that YHVH is a bull who covers your sins. The ancient Israelites had that mindset because of the 1500 years of bull worship in the Houses of Judah and Israel. The Book of Hebrews sets the issue straight. There is no forgiveness of sin with bulls’ blood. Forgiveness happens when YHVH accepts the sacrifice! Thus, it is YHVH, Yeshua, who has always forgiven people’s sins!

The second thing Hebrews makes straight is that Yeshua’s blood is perfect, superior in every way. Let me repeat: His blood washes us, cleanses us and removes all the stain of sin so that there is no evidence that we ever sinned.

Rev 1:5  And from Jesus Christ, who is the faithful witness, and the first begotten of the dead, and the prince of the kings of the earth. Unto him that loved us, and washed us from our sins in his own blood,

1Jn 1:7  But if we walk in the light, as he is in the light, we have fellowship one with another, and the blood of Jesus Christ his Son cleanseth us from all sin.

Pagan ideas and terms that have gotten into the church and Christians say them without realizing they are trampling Yeshua’s blood, equating it with bulls’ blood. As we get closer to the Kingdom, we need to stop doing pagan rituals and using pagan phrases and declarations to describe our relationship with Yeshua!

READ MORE ABOUT IT

https://www.britannica.com/topic/Taurobolium Taurobolium, bull sacrifice practiced from about ad 160 in the Mediterranean was a continuation of the Egyptian Hapi (Apis) bull cult. The nature and purpose of the ceremony seems to have gradually continued changing during the late 2nd and 3rd centuries. At the beginning it apparently resembled similar sacrifices performed in the cults of other deities, such as Mithra. By about 300, however, the ceremony had changed drastically. The person dedicating the sacrifice lay in a pit with a perforated board placed over the pit’s opening. A bull was slaughtered above him, and the person in the pit bathed in the blood streaming down.

https://blogs.transparent.com/latin/roman-mythology-ii/ From Iran came Mithras. He was a soldier-god. The Persians saw Mithras as an intermediary between good and evil forces. After an impressive ritual, in which the faithful was covered by the blood of a slaughtered bull, he became a Mithras soldier, as Mithras, at the beginning of the world, captured a large bull that symbolized him and sacrificed it by order of God Sun.